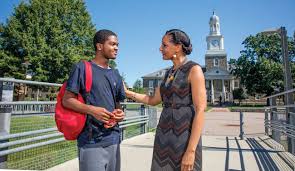 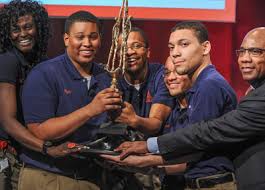 Morgan State University is one of several Historically Black Colleges or Universities (HBCUs) who have received an EiR grant. As a HBCU pioneer, Morgan is the first HBCU to study the effect of nanoparticles on the protein and lipid content of a model cyanobacterium.
In October, 2019, Morgan State University’s School of Computer, Mathematical and Natural Sciences (SCMNS) was awarded a $499,999 grant from the National Science Foundation (NSF) to be used to advance interdisciplinary research at the interface of biology, chemistry and engineering with a focus on studying the role of nanoparticles in cyanobacterium for enhanced biofuel production.
Under the direction of principal investigator Viji Sitther, Ph.D., associate professor of biology at Morgan, and Huan Chen, Ph.D., a research faculty member at the National High Magnetic Field Laboratory (National MagLab), the project will serve to train and mentor underrepresented students in this specific area of the sciences, with an aim of enhancing the participation of women in STEM.
The research will make a huge positive impact on the environment by leading to the creation of an environmentally safe alternative energy source to replace fossil fuels.

One of the nation’s most prestigious university choral ensembles, The Morgan State University Choir was led for more than three decades by the late Dr. Nathan Carter, celebrated conductor, composer, and arranger. They perform classical, gospel, and contemporary popular music, the choir is noted for its emphasis on preserving the heritage of the spiritual, especially in the historic practices of performance. They have performed throughout the U.S. and all over the world—including The Bahamas, Virgin Islands, Canary Islands, Canada, Africa, Asia, and Europe, most recently in Saint Petersburg, Russia.

The Morgan State Bears athletic legacy began in 1926 under athletic director Charles Drew. From 1929-1959, Legendary head coach Eddie P. Hurt led a dynasty not only in football, but basketball and track. The Bears had thirty of its football players drafted and played in the NFL, producing four Hall of Famers. The track athletes competed internationally and received world-class status.
The Morgan State men’s basketball teams made two NCAA Basketball appearances and won numerous MEAC titles.
Johnny Sample was a two-star player in football and baseball.
Until the turn of the 20th century, Morgan was the first and only historically black university to field a lacrosse team.
The Bears compete in the NCAA Division I Football Championship Subdivision, currently as a member of the Mid-Eastern Athletic Conference (MEAC). 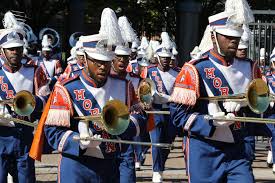